Control the Things You Can, and Never Give Up! 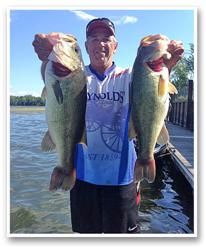 To say that winning the Massachusetts Bass Federation State Championship on Lake Champlain at Ticonderoga was an emotional roller-coaster would be an understatement. I blew my outboard five minutes after blast-off, trolled to a spot I had never fished, and caught a 4.71 smallmouth on my first cast. And that was just on Day One!

When my engine blew, I spent a few minutes feeling sorry for myself, then I readjusted my goals for the day. I was right in front of the fort at Ticonderoga (there are a lot worse places to break down), so I just trolled to the shore and looked for the edge of the weed line. Once I hit eight feet, I took my first cast, and the line went tight right away on a solid fish.

As soon as I hooked the smallmouth, I pushed the button to deploy my 12 foot Talons. I was throwing a 5 ¾ Watermelon/Red Kut-Tail Worm (208) on six pound test, Texas-rigged on a 1/0 Gamakatsu EWG hook so it took me a while to get the fish to the boat. Once I put him in the well, I caught around seven or eight more fish off the same exact spot, which was a break line in where a grass flat dropped from three feet out to eight. Over the next six hours, my non-boater and I dialled in on the spot. I culled up to 15.94 and he got 14.5. The fish were on the shallow part of the break-line early, and then moved to the deeper grass. By early afternoon, with the sun high and no wind, the fish were on the outside edge in eight feet.

Earlier in the day, when I had a limit and was culling and my non-boater did not have a fish, he eventually asked, “What the heck are you doing that I’m not?” I suggested he slow down, and switch baits. I tossed him a bag of my Kut-Tail worms and he caught two four-pound fish quite quickly. The heavier, salt-impregnated, plastic that GYCB uses provides me with a longer cast, which can be key on pressured fish. It seemed the color made a difference as well – Watermelon/Red Flake (208) was easier for the fish to see in dirty water, and the water at Ticonderoga was much dirtier that unusual due to two weeks of steady south wind.

We fished until we both had a solid bag, and then spent two hours trolling back to the ramp, fishing the entire way. With my boat disabled, I was now a non-boater for day two, but as bad as I felt the situation was, my luck soon changed when I discovered I’d drawn Robert (Buddy) Amaral as my boater for Day Two. Buddy was very worthy of his nickname! He informed me, “You’re in the hunt, my fish aren’t that great, let’s go to your stuff and you can run the boat the entire day.” I was incredulous, who could ask for more?

Day two I tried to start on the weed bed where I had fished the first day, but there were ten boats there already. After two casts, I pulled the trolling motor, and ran the pattern I had discovered during practice. I had identified about 15 specific small spots all the way from the Ticonderoga ramp to the lock at Whitehall New York (about 25 miles). The spots were spread pretty evenly between the ramp and the lock. I’m always looking for specific features; a weedbed on a point, a dock, or a rock bluff. The spots need to have bait, which can be either white perch, sunfish, or Alewives.

My first stop produced a solid three-pound largemouth, plus another over two. My third stop gave me another three-pound fish and I was on my way. My fifth stop was nothing short of magic. On my first cast I caught a solid fish over two, and I was now one fish away from a limit. I knew I only needed about 13 or 14 pounds to make the State Team as a boater, which would qualify me to fish the TBF Divisional Tournament.

On almost my next cast I set the hook on a big fish – he pulled on my drag, digging for the shore. I was only using 6lb test, so I had to be careful. When I saw the big fish, my heart nearly stopped. I carefully played him, turned him, and got him near the boat. Once I had him in the net, I could breathe again. He weighed in at six pounds which put me right at 16 or 17 pounds. I may have blown my engine on Day One, but I knew I’d just made the State Team.

The rest of the day we just went fishing. I got a three a few minutes later, culling a 2.35. I ran a bunch of spots, but was unable to cull my 2.57-pounder. On the way back, I stopped at the spot where I caught the six and there was an older gentleman shore fishing for catfish. We chatted briefly and then he said, “You should cast under that tree, a big fish lives there!” Of course you know it was right where I had caught the six-pounder. I went ahead and cast on the same spot, not expecting a bite when the line suddenly went tight. It wasn’t another six-pounder, but it was over five and I quickly culled my 2.57. Catfish man didn’t seem surprised – “I told you so! Now bring him back after you weigh him in.”

I weighed 19.84 for five fish and won the tournament with a two-day total of 35.77. I like to think I can learn something every time I go fishing, and this tournament was no different. I have always had confidence in the Kut-Tail worm, but I caught virtually all my fish on it, and my confidence in it now is even higher. Texas-rigged, you can fish it through the grass fast like a fluke, or slow like a Senko. Either way, it has deadly action, and works well on fish that aren’t active.

I’m glad I didn’t give up when things got tough on me right out of the gate at this tournament. Now the only thing I need to do is make sure that GYCB “never gives up” making the Kut-Tail Worm.

From The InsideLine Online Magazine