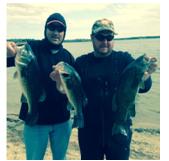 Mass Bass Federation held its annual Youth Benefit Tournament on Lake Wequaquet on the Cape.  The weather was good for an early April tournament.  The winners were Dave Andrews and Scott Leppanen with 13.02 lbs. and lunker Smallmouth that weighed 2.85 lbs.  Dave and Scott primarily fished a variety of jerk baits along break lines while rotated through various spots. They caught one key fish on a jig under a dock. They culled only once during the day while catching four Largemouth and two Smallmouth. They found water temps of 42 to 47 F.  Second Place went to Bob Rivet and Ralph Glebus with 9.15 Lbs.  Bob and Ralph also had Lunker Largemouth of 5.73 Lbs.  Third Place went to the team of Jenkins and Jenkins with 5.91 Lbs.  Mass Bass Youth would like to thank all those that attended and our Youth sponsor Reynolds Garage and Marine.