Two Massachusetts Bass Federation young anglers that came up thru the Federation youth programs are headed to The Bass Federation National Championship at Lake Conroe in Texas at the end of February. Romano Duncan finished first for Massachusetts in the boater division at the district 16 National Semi-Final held at Lake Champlain, South Hero.  Romano was second overall in the boater division with 38.02 pounds of smallmouth bass.  Romano is a member of Wildside Bass Club and came up thru the Federation High School Division.  Romano is currently attending Plymouth State College.  The Co-Angler representative for Massachusetts at this year’s TBF National Championship will be Mike Morrissey.  Mike won the Co-Angler division with 33.45 pounds.  Mike is a member of Northeast Bass Anglers and came up thru the Federation Youth program as well.  We want to wish both of these anglers good luck at this year’s TBF Championship! 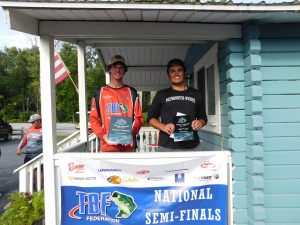