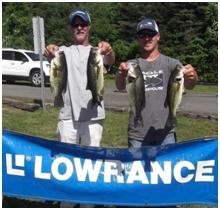 The weather was great for the Federation June Father’s Day tournament on Barton’s Cove.  Barton’s Cove has been the place of some great weigh-ins.  This section of the Connecticut River is known for big bags of Smallmouths and Largemouths.  But there were no huge bags as we have seen in the past.  Due to heavy rain up north the river was high and running hard all day.  There is always someone that figures out what the fish are doing and how to catch them.  That was exactly what the Team of Bruce Burns and Dave Miller did.  The team of Burns and Miller weighed in 14.87 pounds of Largemouths.  It was an impressive bag for the conditions of the day.  Bruce and Dave won $1210 for the win.  I believe it is their first Federation Trail win.  Congratulations to this team of anglers.

Second place went to Coleen McKay and Jarrod Spice with 13.09 pounds anchored by the tournament Lunker Largemouth that tipped the scales at 5.02 pounds.  That earned Colleen and Jarrod $1020 for second place and Lunker pool for the day.   Third place and $590 went to the team of Aldrich and Bellville with 11.93 pounds.  Fourth place and $415 and Ranger Cup money went to Jim Gildea and Mark Nugent with 11.35 pounds.  Fifth place and $280 went to EJ Nocon and Peter DiRienzo with 10.94 pounds.  Hats off to EJ and Peter they blew their motor on the way up the river at 7:05 AM and still managed to get in the money with 6 Largemouths.  Sixth Place and $215 went to the team of Joe Burchill and Bob Mazzone with 10.92 pounds.  Lunker Smallmouth went to Jason Van Hilo and Ed Gauthier with a 3.01 smallie worth $260.  The Wild Card $180 went to Joe McKinnon and Peter MacLellan.

With the conditions not favorable there were 8 limits caught which is very impressive.  Great job.