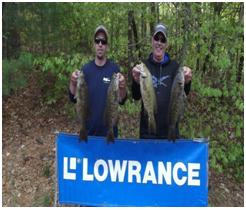 The Mass Bass Federation Trail opened up the 2014 Trail with a stop at Mashpee/Wakeby on the Cape.  The lake is known for great bag of fish at the weigh-ins.  The weather has been cold and windy, dirtying up the water which made for some tough fishing.  As always there is someone that can find the fish. The Smallmouths were starting to spawn and those that did their homework were rewarded.  The team of Bob Rivet and Paul Carvalho had an impressive bag of brown fish weighing 22.35 lb.  They also had a 3.48 lbs Smallie which took the lunker pool. 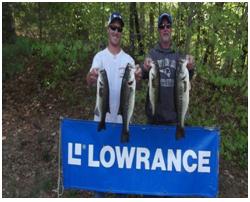 Second place went to the father and son team of Barrett and Barrett with another great bag of smallies weighing in at 22.11 lbs.  Third place went to the team of Mike Tamburello and Toby Slagle with 7 Largies and 1 smallmouth weighing 20.95 lbs.  Mike also got the Ranger Cup money.  Fourth place went to Burns and Miller with 19.42.  Burns and Miller got Lunker Largemouth with a 4.88 lbs fish.  Fifth place went to the team of Bacon and Snow with a mixed bag of 17.89 lbs.  It was a great day of fishing by all.  Federation Vice President Dave McNary wants to remind everyone that there is only a few spots open for the Barton’s Cove Trail Tournament so if you have not sign-up yet you need to so if we are going over the 24 boat limit we can get an EPO Officer.  Be safe on the water and we will see you Father’s Day at Barton’s Cove!